Made from a traditional Chinese black tea from Fujian Province, our Lapsang Souchong features robust smokey flavor, true to the style of tea. Smoked over pine wood, this tea is a treat. You will love the bold flavor of our loose leaf Lapsang Souchong.

Lapsang Souchong is a smoked tea that originated in Wuyi Mountains in the Fuijan province of China. Today it is made in various tea producing countries. The story of its creation has a few different versions but they generally agree that the tea was created during the early part of the Qing Dynasty out of necessity to either save the tea from impending bad weather or to hide it from invading troops that had entered the region as part of the effort to unify China under Prince Regent Dorgon. Either way, the tea leaves where smoked over pine wood to speed the drying process and then packed in barrels to store in mountain caves. Eventually it was shared with Western tea merchants who bought the tea and found that the Europeans loved it. So the following year, the merchants asked for more of the tea and offered a higher price for it than the traditional teas and a new product was born. Sometimes you will find references to Lapsang Souchong as “Westerner’s Tea” and while that may have been true to begin with, it is also consumed in China.

Lapsang Souchong is made from the 4th and 5th tea leaves on the stem, the same ones used in some oolong and pu-erh teas. These are bigger leaves, allowing them to withstand the pine smoke for drying without losing their shape or their tea flavor. Some people suggest that these tea leaves somehow are of lower quality because they are not as delicate in flavor as the bud and first two leaves, but they neglect to give credit to these leaves for having a more consistent brisk flavor and the capability to hold their form under long travel.

The leaves are withered over pine wood fires (cypress is also used but pine is the original wood for this tea). The leaves are then pan fried and rolled. The rolled leaves are then packed into barrels and left to oxidize. Once they have hit the desired oxidation level, they are pulled out of the barrels, pan fried and rolled into long strips. Finally they are put into bamboo baskets and hung over the pine fire to absorb the flavors of the pine smoke. 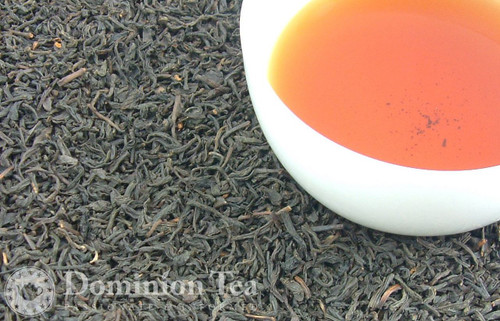