This Empire Keemun tea is made in the same tradition as the original keemun teas that made their way to the American colonies so long ago. This deep rich tea is the perfect start to every morning.  Historically, it was the original base to English Breakfast tea. This is a great example of a Chinese black tea with a balanced mouth feel, minimal to no bitterness, and a touch of natural sweetness on the tongue.

Originating in Qimen County, Anhui Province, China, we consider this to be an Adventurous tea as an unflavored black which is often used as a base to other tea blends. It's an easy next step toward exploring single variety and/or single estate teas.

Tea traveled to America with the colonists who arrived from all European countries, with some colonies like New Amsterdam (modern day New York) being heavier tea drinkers than all of England at the time. The British implemented a mercantile system, as with its other colonies, which focused on trade to increase its wealth. With this system London based businesses were protected through the use of trade barriers, regulations, and subsidies but it also required the British government to fight smuggling and illegal trading with other countries, especially by American merchants.

Tea in America is tied tightly to the early ship building in the colonies. Massachusetts and Pennsylvania were both major ship building colonies, where craftsman took advantage of the abundance of local resources, craftsman, and cheap labor to build more and faster clipper ships than the British. Many of these clipper ships were put into use by the American merchants to trade directly with other countries, bypassing the British government. Smuggling was extremely common in the American colonies and tea was high on the list of illegal goods.

The colonists adopted many of the British customs like tea drinking both at home and in public coffeehouses (Yes, coffeehouses did exist 300 years before Starbucks). It should be noted that much of the tea consumed in the colonies and Britain was green tea. The social demand for tea, and the additional taxes levied on tea from the British East India Company made smuggled tea a very common commodity in the colonies, most coming from the Dutch East India Company. The loss of revenue by the British East India Company did not go unnoticed and in 1767 the tea tax was levied. This tax became one of many levied on the colonists in the ten years leading to the Boston Tea Party and the American Revolution. As Joseph M. Walsh noted in 1892, “The birth of the greatest nation of all time due to a three-penny tax on tea!”

After the revolution, American merchants used their clipper ships to go direct to China for trade, bringing tea and other goods legally into the United States without British involvement. These merchants became the first of the American millionaires, with tea being a dominant contributor to their wealth. This wealth was later used to give loans to the fledgling American government to purchase arms for the War of 1812 other ventures necessary to stabilize and expand the country.

Step 1:
Preheat mug with boiling water, discard and refill.
Step 2:
Steep 1 round tsp or 3-4 grams of tea per 8 oz of water.
Step 3:
Steep for 3-5 minutes as desired. Experiment with slightly cooler water or shorter steeping times. Try one additional steeping if desired. 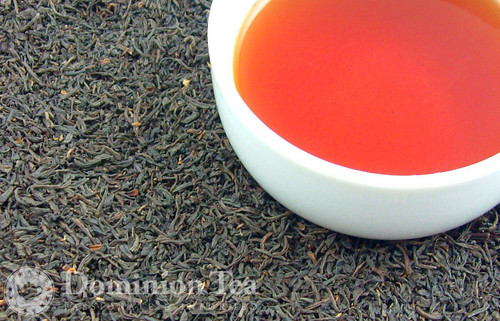